It has happened again. Another suicide driver has plowed into civilians in Jerusalem. In the second such attack in as many weeks, an Arab man mowed down four civilians at a light rail station in eastern Jerusalem. Proceeding down the street about one-quarter of a mile, he rammed ten more crashing his vehicle. Running from his car armed with an iron bar, he attempted to evade police vehicles arriving at the scene. Security footage shows police corralling the man. While continuing to run, police shot and killed him. The Jerusalem Post reports that, according to security sources, the terrorist was Ibrahim al-Acri, a known supporter of Hamas and resident of eastern Jerusalem's Shuafat neighborhood. Like all residents of eastern Jerusalem, he held an Israeli identity card. This allowed him free movement throughout Israel. Police spokesman, Micky Rosenfeld, reported at the scene that there was no intelligence indicating a terrorist attack was planned. At the same time however he acknowledged the nature of the attack was the same as others that have recently occurred in what is virtually the same location. Proceeding south on Jerusalem's Highway 60, the suicide driver swerved to the Shimon HaTsadik light rail platform running down four people. One of these is reported killed. In the aftermath, Orthodox search-and-rescue personnel were seen cleaning the scene, including what appeared to be blood. After assaulting four with his vehicle, the terrorist raced down the road another quarter mile where he ran down as many as ten more. Latest reports indicate that a total of fourteen people were wounded in the attack. One of four hit at the Shimon HaTsadik station is reported dead. Hamas quickly claimed credit for the attack. Calling al-Acri a "martyr" who carried out a "heroic attack." "We call on the people of Jerusalem and the West Bank and all of the Palestinians to carry out more of these activities with full force in order to defend al-Aksa," Hamas's statement read. Some observers in Jerusalem say that a "third intifada" has begun. Intifadas One and Two were characterized by suicide bombings in public places. This intifada, it seems, is using vehicles as suicide weapons against Jerusalem's civilians. 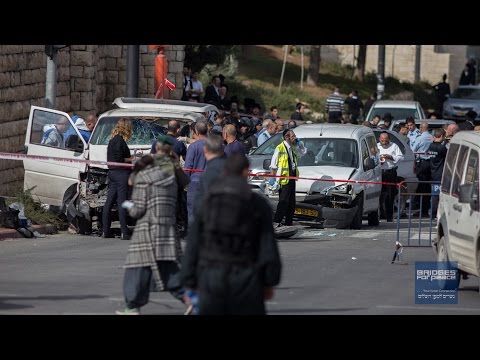